Help improve these docs on GitHub 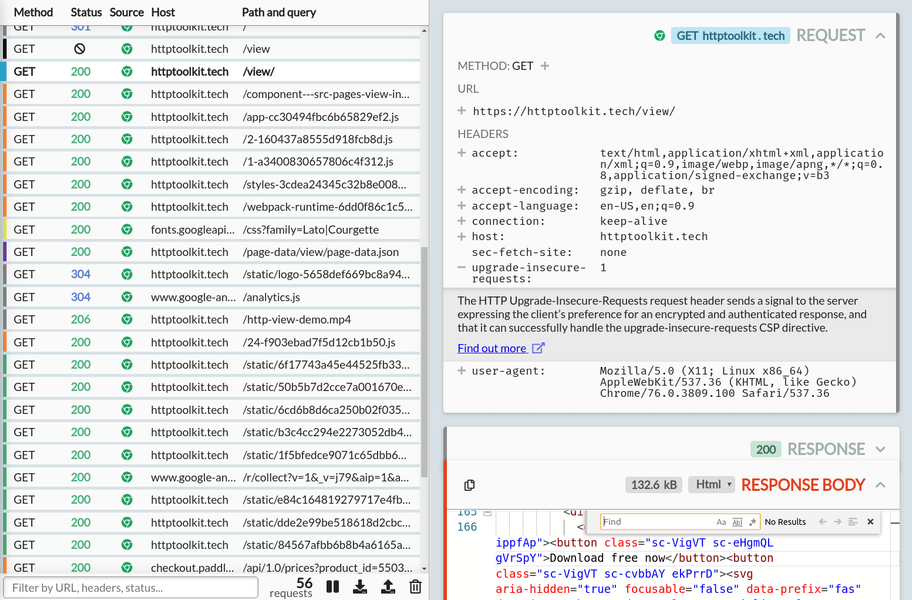 On the View page you can examine collected HTTP and HTTPS traffic up close.

It shows the traffic collected from HTTP clients that you've intercepted, and/or past HTTP traffic that you import from a HAR file.

The page is in two parts:

You can drag the central divider to resize either half as you'd like. 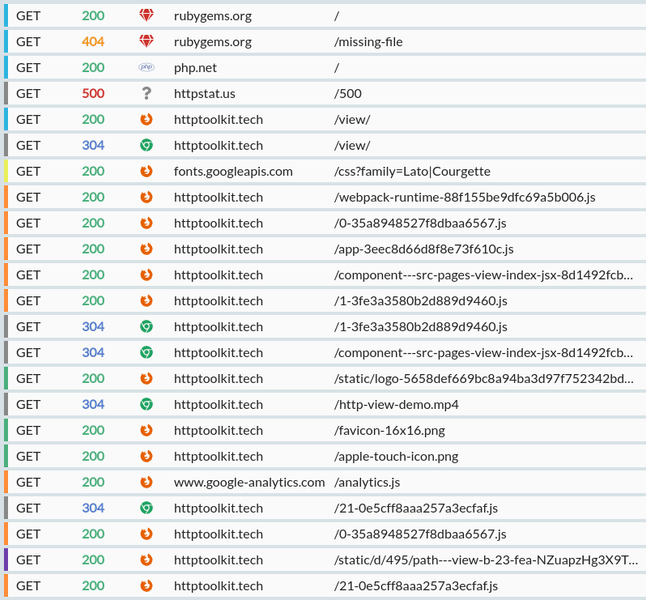 The exchange list shows a list of the HTTP events, in the order they happened. For HTTP exchanges, that's the order the requests were initially sent.

At the bottom of the list, there's a few useful controls:

The right pane is made up of a series of 'cards': collapsible sections, which provide different views of the details of the selected event. You can see an example of each card below.

For an HTTP exchange, there's a few cards that will be shown:

It's also possible to expand the request and response body cards, so they fill the entire pane. In this case, only that card will be shown.

For HTTP Toolkit Pro users, the request card may show metadata & validation, for requests to recognized APIs. This is powered by the OpenAPI specifications of the OpenAPI Directory. As an example:

Here, a request to the GitHub API is recognized as such, so includes:

In addition to API metadata for Pro users, for all users this card shows the core request data: the HTTP method, URL & headers sent.

All standard methods and headers will be recognized, and clicking the plus symbol next to them will show a quick explanation of what they mean, with links to the Mozilla Developer Network's full documentation for that method or header.

The URL can also be expanded, to show it broken down for readability into the protocol, host, path, and each of the query string parameters included.

Both requests and responses can have bodies, and when present, the corresponding request or response body card will be shown. These both work exactly the same, and both can appear at the same time, e.g. for a POST request with a 200 response.

This card consists of a viewer for the body content, plus a few controls. Let's start with the controls:

The viewer itself appears below, showing the content formatted according to the formatting dropdown. 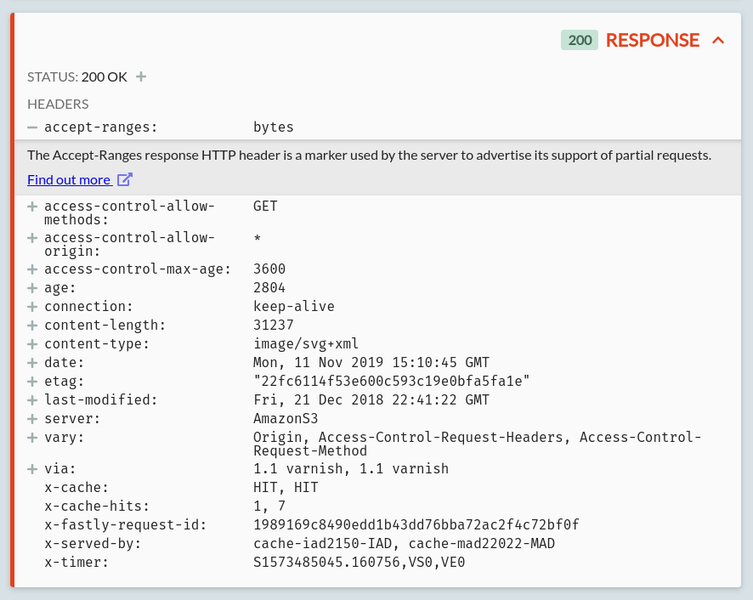 The response card shows the HTTP status code, status message, and response headers. For HTTP Toolkit Pro users, the response status itself may come with further explanations powered by any detected OpenAPI specifications from the OpenAPI Directory.

All standard status codes and headers on this card are automatically recognized, and clicking the plus symbol next to them will show a quick explanation of what they mean, and links to the Mozilla Developer Network's full documentation for that status or header.

Only available with HTTP Toolkit Pro

Only available with HTTP Toolkit Pro 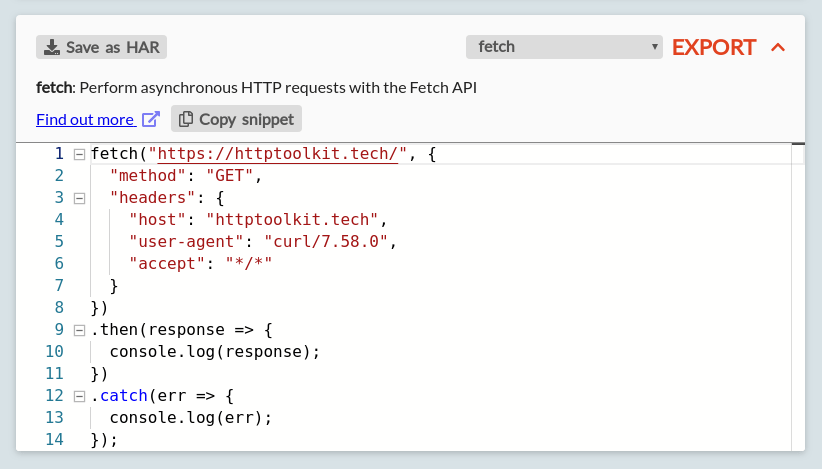 The export card allows you to export a given request & response as a HAR file, or to export the request as ready-to-use code for a wide selection of languages.

You can export the exchange as a HAR file by clicking the 'Save as HAR' button in the top left. This exports this individual exchange into a standalone file. Note that's it's also possible to export the full set of currently filtered exchange from the exchange list on the left, using the export button in the list footer.

To export as a code snippet, first pick your language or tool of choice from the list. The list includes:

A short description of the client and a link to its full docs will be shown in the body of the card, followed by the full code snippet (shown in a Monaco editor, with all the same features of the body editors described above).

You can copy the entire snippet using the 'Copy snippet' button, or copy individual segments of the snippet by hand.

Each snippet is intended to be representative ready-to-use code for the given target, but you should pay attention to application specific details, and be aware they you may need to customize security settings (e.g. certificate trust & validation) and add appropriate error handling for your specific environment.

When viewing a request or response that is paused at a breakpoint, some other cards may not appear, or may be replaced by editable cards. The rules that trigger breakpoints can be configured on the Mock page. 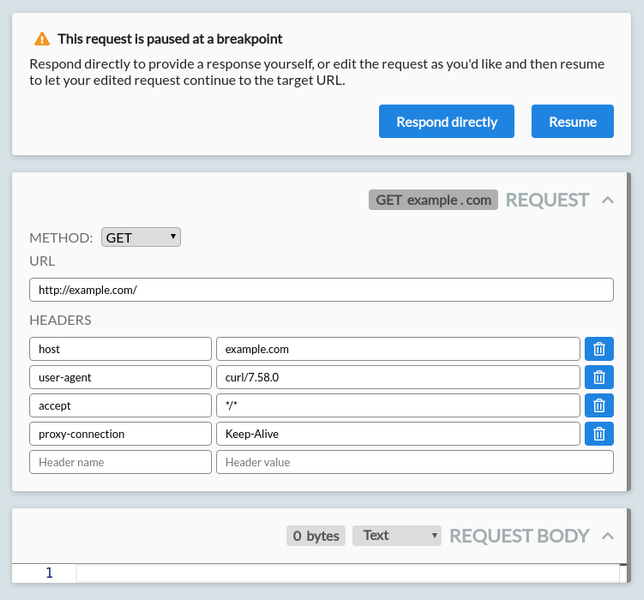 From here, you can:

Press 'Resume' in the breakpoint header to forward your request on to the target server.

You can also press 'Response directly' to skip forwarding the request entirely, and instead manually provide your own response. This triggers an immediate response breakpoint, for an empty response. 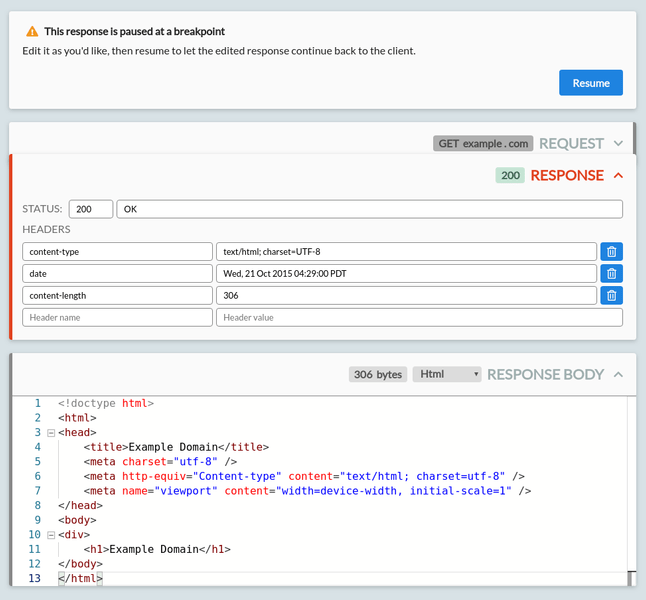 From here, you can:

When you're done, press resume to let the response continue back to the HTTP client.

There are a couple of other things about breakpointing worth noting:

When an IPFS or Ethereum interaction is selected, an extra card will be shown above the raw HTTP data, showing the details of the interaction: 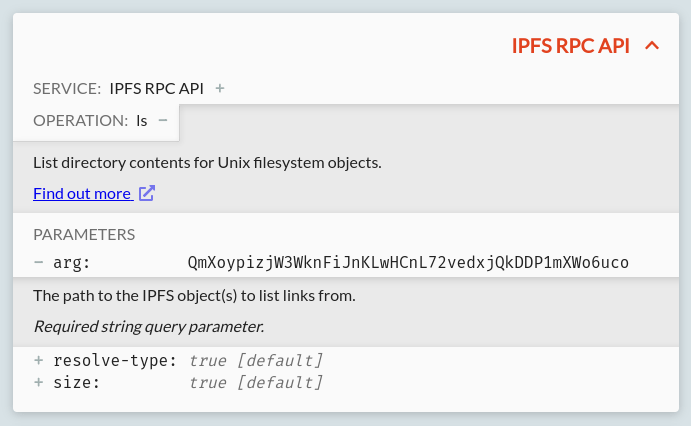 The details shown will depend on the request and the specific type of interaction, but in general this card will include:

If the parameters for an Ethereum or IPFS request are invalid or unrecognized, errors may also be shown here.

WebRTC traffic is shown in a selection of cards, including: 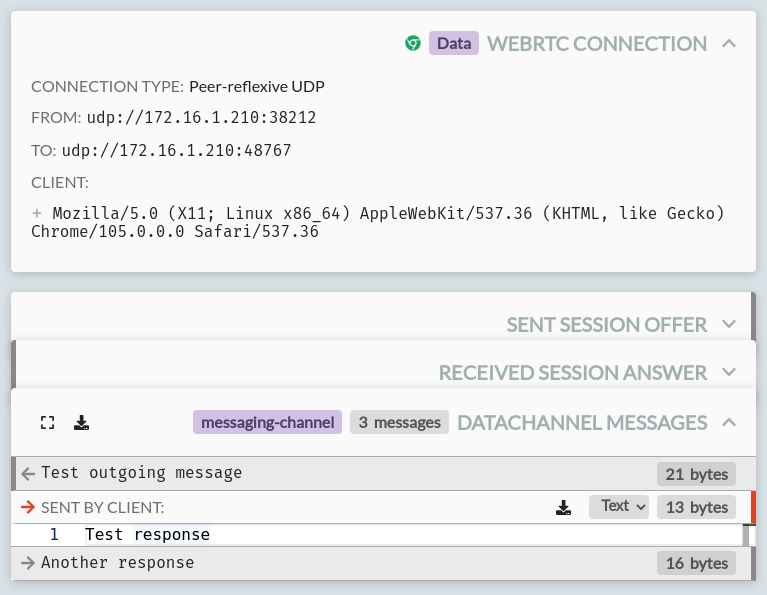 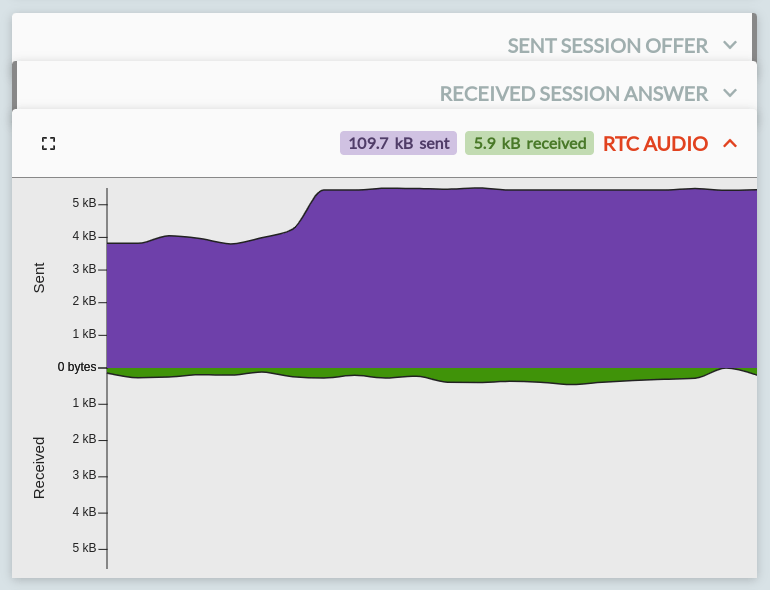 Any questions? Get in touch

Edit this page on GitHub
Terms of ServicePrivacy PolicyComparisons
100% open-source
Dive in at github.com/httptoolkit
Built in Barcelona
by Tim Perry